In our search for things to discover in all of these new cities, we’ve come across some excellent tip-based tours (read: advertised as free but you’re expected to tip the guide). Munich was our first experience with New Europe Tours – one “free” and one we paid for ahead of time.

Our first tour was the “free” tour which left from Marienplatz, one of the main squares in Munich (at 3pm – turns out when you drink with Germans the night before, you tend to sleep til 11 without realizing it!) which is famous for the glockenspiel, a large cuckoo clock of sorts. More about that later.

Our guide was fun; a young 20-something from Ireland who was losing his voice and explained at the beginning that “over 80% of the questions he asks can be answered with ‘beer.'” This is our kind of guide!

The tour was also wonderful. We learned a lot of facts – some fun and some somber – about Munich and Germany. Most memorable were Dodgers Alley (a memorial to citizens who were sent to concentration camps because they purposefully avoided a Nazi memorial), a brief history of Oktoberfest and the kings leading up to its founding, and of course the glockenspiel.

Ah, yes, the glockenspiel. Not only is it fun to say, it’s also boring to watch! For some reason, the touristy thing to do in Munich three times each day is to watch a not-so-intricate cuckoo clock chime horrifically out of tune from the bell tower of what looks like an old church but which was actually built in the 20th century.

It was more interesting to me that SO MANY PEOPLE packed the square! Find a YouTube video of this clock and you’ll see why I’m so amazed – it’s large figurines on a turntable twirling around! That’s all! Though, some native Munich residents have added their own flair: at one point two jousters, er, joust, and Bavaria wins which sets off big whoops of victory from what looked like very drunk members of a bachelor party.

(By the way, if you think your bachelor/ette party was over-the-top or well organized, you are wrong. In Munich, the group of 10-20 buy matching t-shirts or matching outfits – one group of girls wore the traditional Bavarian beer maid dress – and have to interact with the crowd and embarrass the honoree. To say the groups stood out is an understatement. Oh, and they’re also really drunk and causing a scene.)

Our second New Munich tour was the Beer Challenge. I’m not sure why it’s a beer “challenge,” other than at the beginning the guide mentioned there is a completely subjective drawing at the end to win a free tour from New Europe tours. It’s a well-organized, guided pub crawl. Which is awesome!

We went to a beer garden, Hofbräuhaus, a bar across from Hofbräuhaus, and another bar. There might have been one more but that’s not important.

The BEST part was it’s a bilingual tour, and I wound up sitting next to a couple from Spain! After our guide gave the group a set of instructions on how to order beer within the group, they gave each other the ‘I don’t know what she said, do you know why she said?’ look and I intervened. And then we were friends! I learned a lot about Spain – they’re from Barcelona – and we had fun.

We hung out off-and-on with them as well as a couple from Brazil, a kid from Russia, and other random people from the world. The group was huge – probably 30-40 people being herded by two tour guides.

And – Bonus! – it ended three blocks from our hotel! 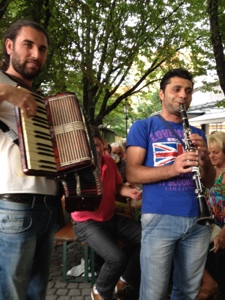