Posted at 05:18h in Europe, Oslo by Ellen Schwartze 2 Comments
0 Likes
Share
Don’t forget! You can still get a personal postcard from me just by signing up for my email list before Dec. 31st, 2015. The first batch goes out tomorrow!

I woke up before the sun today. It’s not that hard — sunrise wasn’t until 8:50. PROOF for all you haters (coughHUSBANDcough): 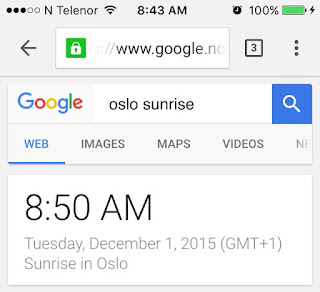 I got going and set out to explore my (AirBnB) neighborhood, Grünerløkka. I have little confidence in how to pronounce it, but the name looks so Norwegian! The area buildings are reminiscent of Notting Hill colors, so I felt pretty at-home wandering the streets: 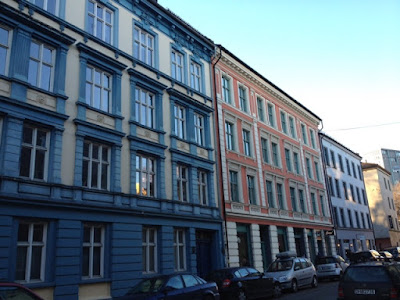 I grabbed a latte from Tim Wendelboe Espressobar (it was good!) then walked to the Akerselva riverfront walk, which is so pleasant I had to linger. The sun is always in “golden hour” positioning at this time of the year in Oslo, so it’s fun taking photos of what’s caught in the light. I took these photos around 11:15am, and it feels like early morning or late afternoon. My head-clock is so confused! (As is my wrist-clock. Oslo is an hour ahead of London and my watch doesn’t update automatically and I’m only here for two nights, so…) 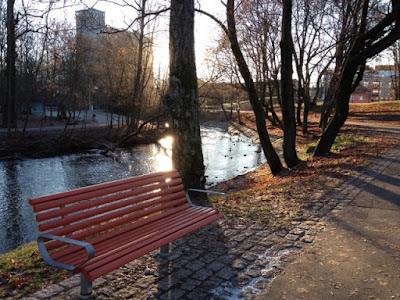 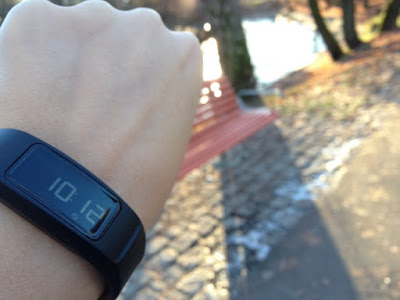 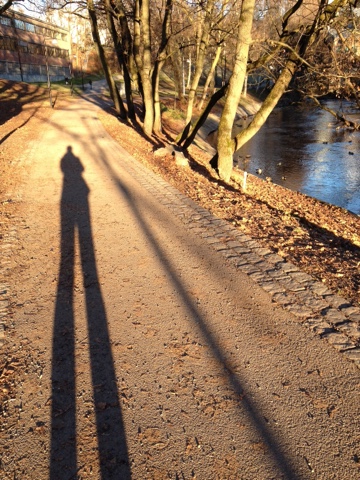 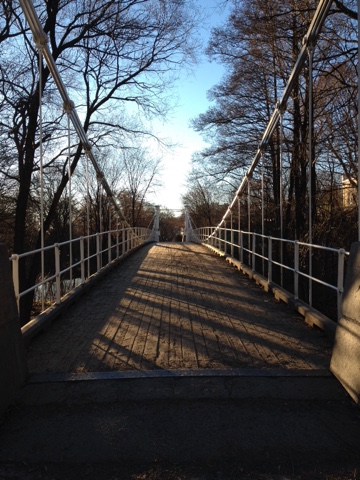 Then I walked just a few blocks to Telthusbakken (gesundheit!) which still has colorfully painted wooden houses. My favorite was at the top of the hill: 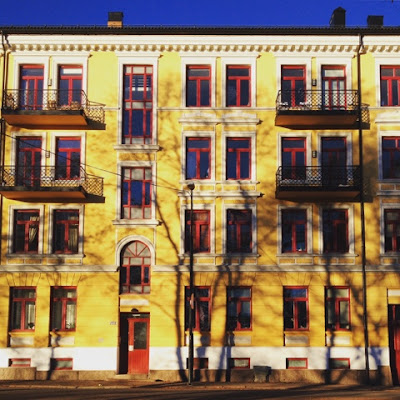 By this point I am COLD! I am sure that it has got to be 20 degrees, so I checked. Nope. It’s in the mid-thirties. Granted, that’s still a bit nippy, but I’m a KC kid! There are colder winters in KC! Seems like London has already made me soft… I thankfully had the forethought to carry extra socks with me (I wore my Merrells, and they’re designed to keep your feet vented and cool… Not what I want in Oslo in December!) and I put them on later in the day.

For lunch I checked out Mathhallen food market. It’s indoor (yay! warm!) and has lots of trendy food-stand-esque restaurants to choose from. If I lived in Oslo, I would be here often. The atmosphere is easy and open, and there’s plenty of seating. 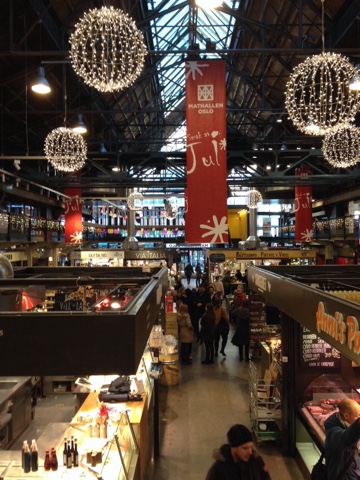 I ate a pork pie from “Hello, Good Pies!” And it was muy delicioso. 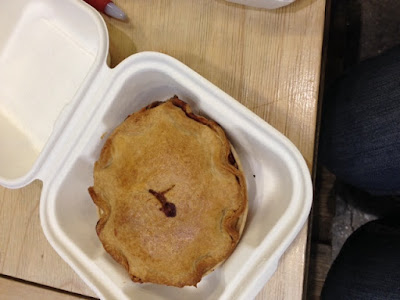 This is also a good time to mention, I will not be eating lutefisk on this trip. I asked about tasting some, but I would have had to buy a whole fish-worth, and I’m just not convinced I’m going to like it enough to spend 180 NOK (about $20) — or easily more money — on one meal. When I’m back here with a travel buddy, I will taste it then. I’m not too worried about it.
By now, it’s a bit after 1pm, so I head over to Holmenkollen, a giant ski jump overlooking Oslo and the fjord. I was not let down. From the T-bane ride to get there, to the sunset two hours later, the trek had great views!
You read that right. Sunset two hours after 1pm. I was on the top of the Holmenkollen around 3:15ish and the sun was already setting. I am not sure I would ever get used to this. I was struggling in London — where the sun is gone-gone-gone by 4:45 — but this is just weird.
T-bane ride up the mountain (t-bane is the metro/subway, but it’s not sub- anything for very long): 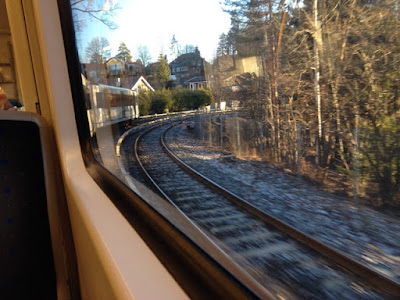 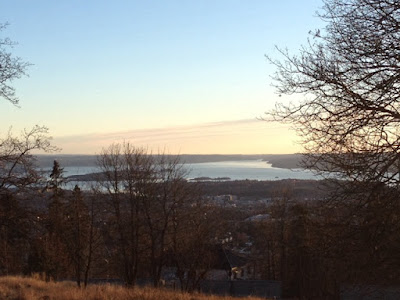 There’s a ski museum beneath the built part of the slope: 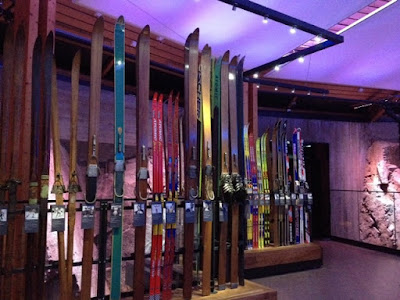 View from the top (there is an elevator to the top, thank god!): 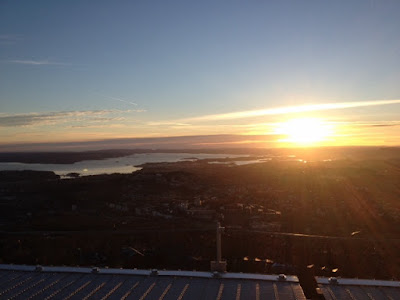 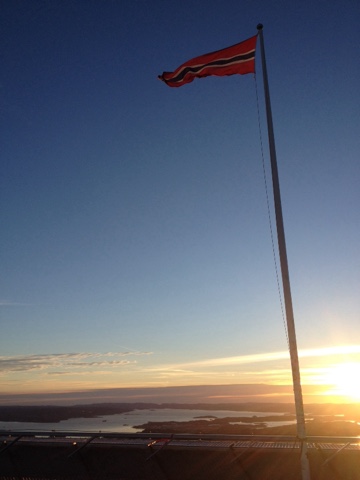 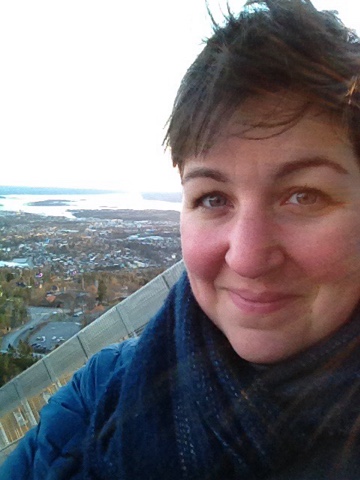 Dinner was an elgburger — any guesses as to what that is? 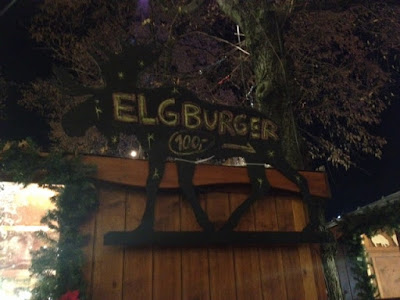 It was good! There was a sweet-ish mayo-y dressing on it. 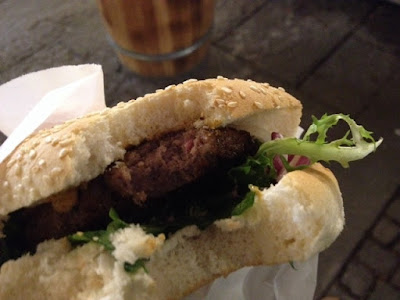 I also tried Gløgg, which is a *different* warm winter beverage from the Solbærtoddy from last night. It was actually a bit spicy, not just spiced! And after being chilled pretty much all day, anything warm between my hands felt nice. (That’s what she said.) 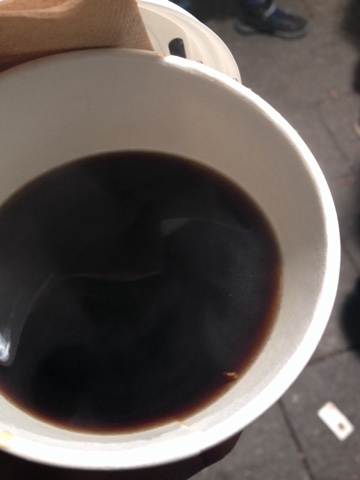 Finally made my way back to home base, where I taught my host (Linda) how to cast-off her knitting project and tried toasted fullkorn, a Scandinavian bread. I actually ate it with butter and cheese, but this photo is prettier. 🙂 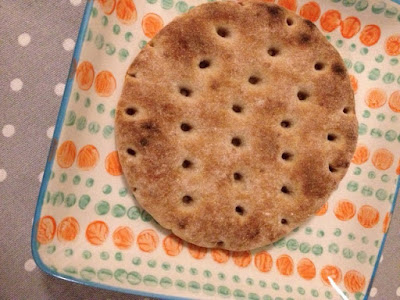 Then Linda revealed that the hot water is included in her rent, so I am finally feeling thoroughly thawed after an irresponsibly long shower. Must find more appropriate winter shoe options! 😀