Posted at 05:43h in Germany, Munich by Ellen Schwartze 0 Comments
0 Likes
[social_share]
Munich was one of Britton’s and my favorite stops on our honeymoon in 2012, so we were excited for the opportunity to share it with his parents while they’re visiting.

We are traveling during Christmas so I was looking forward to catching the tail end of Germany’s famous Christmas markets. I got a glimpse of these in Oslo, and London has several, but Germany is where it’s at! (The origin of seemingly all things Christmas.)

We landed around six, checked in with our Airbnb and grabbed some food at the Iraqi restaurant downstairs. (sehr gut!) It was one of only a handful of restaurants we saw still open as we walked from the Hautbanhopf to our lodging. (As we left I distinctly made note of a bakery within the train station still selling sandwiches, in case we needed to go back for food.) Also, I think we’re staying in the red light district? Several topless posters as we walked along.

Anywho, the internet implied that most of the Christmas markets would already be closed by the time we landed, but I wanted to at least try to see one. So my husband, father-in-law and I headed out for a bit of exploring. We’re staying just a ten-, maaaaaaaaybe fifteen minute walk from Marienplatz, so we headed thataway.
And the streets were So. Empty. 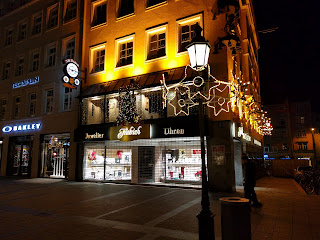 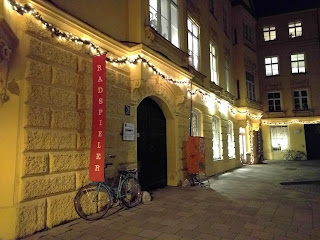 Granted, the last time I was here it was the height of tourist season so my base level is quite skewed. But between the Christmas Eve  holiday and being out of tourist season, I could practically dance in the streets.

On arriving at Marienplatz we found that the internet was indeed correct: the Christmas markets had closed up shop. But the plaza was still really beautiful, with lights and a huge tree outside the glockenspiel. 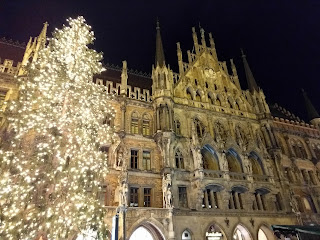 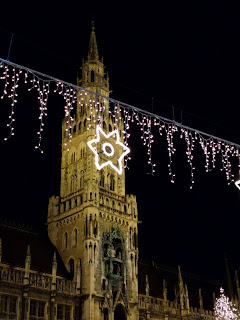 But not ready to turn in just yet, we dragged my FIL to the iconic Hofbrauhaus. The place was still packed at 9.30 Xmas Eve, full of drunk tourists and Germans alike. (At one point I sneezed and our tablemate, who hadn’t previously acknowledged us said, in broken English, “bless you and Merry Christmas!” To which i replied, “what?” because it was really loud in there. She repeated “Merry Christmas”, and then giggled uncontrollably, which I think is how I would react if I’d just had an opportunity to practice Swahili… if Swahili were taught to every eighth grader in Missouri.) 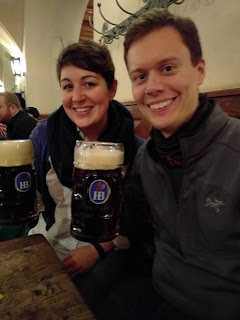 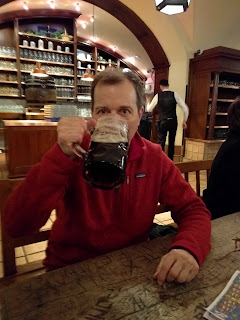 But the Hofbrauhaus doesn’t disappoint. It was rowdy and raucous and full of energy and biers. And also an ancient woman pushing what we think was a portable, wind up organ up and down the center aisle on a cart, with a Christmas tree sticking out the front at a 45 degree angle, wearing something that Britton dubbed a mix between Mrs Claus and Professor Umbridge. Mixed with the table banging, the glass smashing, and the occasional room-wide cheer, I wouldn’t have wanted it any other way.
Merry Christmas, Munich. This is gonna be great.